A story about losing your way and finding your life. Book 1 of 3.

Elizabeth Lara built a perfect life as San Francisco’s top divorce attorney, but when she loses her great-aunt Mags, the woman who raised her, she boards a plane and leaves it all behind.

The Irish shores welcome her as she learns a shocking truth, kept secret for thirty-five years. Devastated and now alone in the world, Beth tries to find peace in a beautiful cottage by Lough Rhiannon, but peace isn’t what fate had in mind. Almost as soon as she arrives, Beth’s solitary retreat into the magic wilds of Ireland is interrupted by Connor Bannon. A man with light brown hair, ice blue eyes and a secret of his own. He’s gorgeous, grieving, and completely unexpected.

With the help of Mags’ letters, the colorful townspeople of Dingle, and Connor, Elizabeth might just find a way back to the girl she lost long ago and become the woman she always wanted to be.

A Note From Jules:

Be forewarned you might not want to start this book late at night—several readers have reported “gobbling it up” and going on to the next book immediately. This book is literary women’s fiction, it is not a traditional romance, per se.

It’s a trilogy, not a standalone. All three books are vital to the story: The Irish Cottage, The London Flat, and The Paris Apartment. That being said, I’ve found that traditional romance readers are VERY happy at the end of London. So take a ride with me, first to Ireland and then the world.

“If you enjoy Nora Roberts, you’ll like Juliet Gauvin. The Irish Cottage is a fresh take on women’s literary fiction, sometimes light and scrumptious and other times quite profound in its observations on life, love and loss.”

“A book that conveys the true feelings of Ireland when you visit…it’s a bit of a romance, history, travel, and mystery neatly tied into a book well worth reading.”

“It will give you the feels—only the good ones!”

EDITORIAL REVIEWS
“It was like a drug that I couldn’t get enough of. The Irish Cottage started it all and now that I have finished all three, I’m starting all over.” -Amazon Reviewer

"I started this book and couldn't put it down. It brought me to Ireland and I never wanted to leave." -Amazon Reviewer
"There is so much to love in this, the first in the [The Irish Heart] Series...I wanted to look out my cottage window and see a Lough of my own and the pub was just asking me to come visit...This story pulled me in from the very first page and I'd highly recommend it to anyone who enjoys contemporary romance, stories of starting over, or romances set in other countries." -Goodreads

"Picked this up because it was set in Ireland, and it took me right back there. Wonderful writer, if you love Ireland and a good read I would recommend this book. I will most definitely be reading the rest of the series." -Amazon Reviewer

“I laughed, I cried, I hoped & dreamed. The series was beautifully told through poignant letters. A keeper of the heart.” -Amazon Reviewer

"Excellent book, one that was very hard to put down. Well-written, exciting, great author! I highly recommend this book to all...Get it then get comfortable because you will be in for a good long read, enjoy!" -Goodreads

"Great book! Elizabeth embodies strength and determination as well as compassion and forgiveness. The Irish Cottage combines the fairytale of Ireland with the real life struggles we all face." -Amazon Reviewer

"I bought the book yesterday and couldn't put it down. Very romantic, very sexy, with a heroine who can save her own bacon...and the wounded, hunky hero--be still my heart." -Goodreads

INTERVIEW WITH THE AUTHOR
Q: How did you come up with The Irish Cottage?
Jules: Well the story came together in pieces. I love Ireland, I've always been attracted to the country, the people, the music, the dancing. I've spent time traveling the country so I knew I wanted to set the book there. And then the character of Elizabeth was based on a lot of the experiences I had when I was in law in San Francisco. When I was immersed in that world--it was a very dark time, and I really did lose my way--like Elizabeth. I even let long-time relationships die because I was in such a dark place, it was difficult to see anything past my own nose. So yeah, I knew I wanted my heroine to be a "recovering attorney" and I knew that I wanted her to have this great love affair in Ireland that would open her up to the truly great possibilities life has to offer.

Q: And what about Connor Bannon? Is he based on anyone?
Jules: Ummm...he might be an amalgamation of several people, but I think I'll refrain from commenting further--have to keep some of it to myself, don't I?

Q: Why did you elect to write literary women's fiction as opposed to traditional contemporary romance?
Jules: I knew I wanted to write in the literary women's fiction space because writing a story where the heroine's evolution is paramount--not just her relationship with Connor--is what really gets me, drives me--I love those types of stories. I like writing herstory--women's lives and journeys are so complex--I wanted to write a series that included a great love story, but didn't sacrifice the heroine's journey in any way. It's about Elizabeth finding her way--we all need to find our way. Sometimes people help with that, but ultimately each of us has to find our own path...and we all need love too.


Q: Why London and then Paris?
Jules: I lived in London for a time--I love it so much. It's one of the best cities on the planet, really. When I closed my eyes and thought about where Elizabeth's journey would take her I knew London would be next. And Paris--I lived in Lyon for a time as well and I've spent a lot of time in Paris so it seemed only natural for the final book to be set there. I also set certain things in motion in The Irish Cottage that make it impossible to end anywhere else--I knew I wanted to end it in France. Plus, Elizabeth has a major sweet tooth, like me, and Paris has the most amazing dessert masters in the world. I spent many hours pouring over the websites of my favorites and discovering some new ones. Those were the hardest and best research nights--I'm nocturnal, I write at night--and pouring over the websites of my favorite masters was heaven and hell. I wanted to get on a plane already. My sugar intake definitely went up while I was writing The Paris Apartment--and my waistline with it. 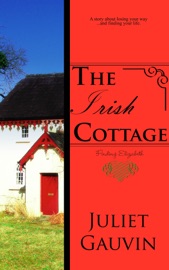 Book 2 in the McMaster the Disaster series, complete with all new Disaster Diary entries.Josie McMaster is on the move to London for a top-secret stint as a ghostwriter for a high profile celebrity. It's her dream job; she's got a beautiful place to stay in the English countryside, full access to th The Irish Cottage: Finding Elizabeth pdf books

From the co-creator of the landmark series Twin Peaks, the story millions of fans have been waiting to get their hands on for more than 25 long years.The Secret History of Twin Peaks by Mark Frost enlarges the world of the original series, placing the unexplained phenomena that unfolded there into a The Irish Cottage: Finding Elizabeth epub books

Hannah knows all too well that evil exists. What she's not sure of is how to escape evil. Where does she find safety from the evil that chases after her? Her only choice is to find someone who does not fear evil. Her search brings her to the MacKewan keep and Slain MacKewan, the infamous warrior kno The Irish Cottage: Finding Elizabeth pdf books

The Real Books are the best-selling jazz books of all time. Since the 1970s, musicians have trusted these volumes to get them through every gig, night after night. The problem is that the books were illegally produced and distributed without any copyrights or royalties paid to the master composers w The Irish Cottage: Finding Elizabeth epub / PDF Books

Publishers Weekly bestseller  A joyful and accessible homeschool guide to making learning a part of everyday lifeParents who are deeply invested in their children's education can be hard on themselves and their kids. When exhausted parents are living the day-to-day grind, it can seem impos The Irish Cottage: Finding Elizabeth epub books

The crucial sequel to the New York Times bestselling The Secret History of Twin Peaks, this novel bridges the two series, and takes you deeper into the mysteries raised by the new series.The return of Twin Peaks is one of the most anticipated events in the history of television. The subject of endle The Irish Cottage: Finding Elizabeth epub books

From legendary storyteller and #1 bestseller Stephen King, whose restless imagination is a power that cannot be contained, (The New York Times Book Review) comes a thrilling new novel about a good guy in a bad job.Billy Summers is a man in a room with a gun. Hes a killer for hire and the best in the The Irish Cottage: Finding Elizabeth pdf books