The life and career of Nicklas Lidstrom almost reads like a real-life hockey fairy tale. Drafted by the Detroit Red Wings as a 19-year-old defenseman out of his native Sweden, Lidstrom spent the next two decades manning the Motor City blueline. During those years he became a Hockeytown legend, amassing a mind-boggling collection of accomplishments and accolades: four Stanley Cups, seven Norris Trophies as the NHL's best defenseman, a Conn Smythe Trophy, 12 All-Star selections, and gold medals in both the Olympics and World Championships.
Off the ice, life appears equally idyllic: Lidstrom is uniformly respected and admired by opponents, observers, and teammates alike, and he and his wife of more than 20 years have four boys who split their time between Sweden and their adopted homeland.
Perhaps only one question remains unanswered about the man teammates referred to as the Perfect Human: exactly how did he do it?
In Nicklas Lidstrom: The Pursuit of Perfection, the Hall of Fame defenseman and a who's-who of hockey luminaries investigate and reveal precisely how he made dominating the game he loves appear so effortless. How did an unimposing prospect catch the eye of Red Wings scouts during an era when few Swedes made it to the NHL? What was the secret to his remarkable endurance and longevity, allowing him to miss just 44 games in 20 grueling NHL seasons? And what level of preparation and study was required to transform a man who was not the biggest or fastest at his position into one of the greatest defensemen in hockey history?
You'll find the answers to all of this and more in Nicklas Lidstrom: The Pursuit of Perfection 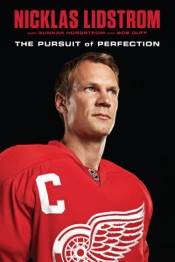