“THE SORCERER’S RING has all the ingredients for an instant success: plots, counterplots, mystery, valiant knights, and blossoming relationships replete with broken hearts, deception and betrayal. It will keep you entertained for hours, and will satisfy all ages. Recommended for the permanent library of all fantasy readers.”
--Books and Movie Reviews, Roberto Mattos

A QUEST OF HEROES (BOOK #1 IN THE SORCERER’S RING) revolves around the epic coming of age story of one special boy, a 14 year old from a small village on the outskirts of the Kingdom of the Ring. The youngest of four, the least favorite of his father, hated by his brothers, Thorgrin senses he is different from the others. He dreams of becoming a great warrior, of joining the King’s men and protecting the Ring from the hordes of creatures on the other side of the Canyon. When he comes of age and is forbidden by his father to try out for the King’s Legion, he refuses to take no for an answer: he journeys out on his own, determined to force his way into King’s Court and be taken seriously.

But King’s Court is rife with its own family dramas, power struggles, ambitions, jealousy, violence and betrayal. King MacGil must choose an heir from amongst his children, and the ancient Dynasty Sword, the source of all their power, still sits untouched, waiting for the chosen one to arrive. Thorgrin arrives as an outsider and battles to be accepted, and to join the King’s Legion.

Thorgrin comes to learn he has mysterious powers he does not understand, that he has a special gift, and a special destiny. Against all odds he falls in love with the king’s daughter, and as their forbidden relationship blossoms, he discovers he has powerful rivals. As he struggles to make sense of his powers, the king’s sorcerer takes him under his wing and tells him of a mother he never knew, in a land far away, beyond the Canyon, beyond even the land of the Dragons.

Before Thorgrin can venture out and become the warrior he yearns to be, he must complete his training. But this may be cut short, as he finds himself propelled into the center of royal plots and counterplots, ones that may threaten his love and bring him down—and the entire kingdom with him.

With its sophisticated world-building and characterization, A QUEST OF HEROES is an epic tale of friends and lovers, of rivals and suitors, of knights and dragons, of intrigues and political machinations, of coming of age, of broken hearts, of deception, ambition and betrayal. It is a tale of honor and courage, of fate and destiny, of sorcery. It is a fantasy that brings us into a world we will never forget, and which will appeal to all ages and genders, including fans of George RR Martin, Sarah J. Maas, Rick Riordan, and readers of the legends of King Arthur and Merlin. It is 82,000 words.

“Grabbed my attention from the beginning and did not let go….This story is an amazing adventure that is fast paced and action packed from the very beginning.”
--Paranormal Romance Guild {regarding Turned}

“A great plot, and this especially was the kind of book you will have trouble putting down at night. The ending was a cliffhanger that was so spectacular that you will immediately want to buy the next book, just to see what happens.”
--The Dallas Examiner {regarding Loved}

“A spirited fantasy that weaves elements of mystery and intrigue into its story line. A Quest of Heroes is all about the making of courage and about realizing a life purpose that leads to growth, maturity, and excellence….For those seeking meaty fantasy adventures, the protagonists, devices, and action provide a vigorous set of encounters that focus well on Thor's evolution from a dreamy child to a young adult facing impossible odds for survival….Only the beginning of what promises to be an epic young adult series.”
Midwest Book Review (D. Donovan, eBook Reviewer) 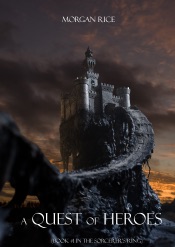 A dynamic story line that grips from the first chapter and doesn't let go. --Midwest Book Review, Diane Donovan (regarding Once Gone) From #1 bestselling mystery author Blake Pierce comes a new masterpiece of psychological suspense: CAUSE TO HIDE (An Avery Black MysteryBook 3).Bodies are b A Quest of Heroes (Book #1 in the Sorcerer's Ring) epub / PDF Books

The most famous confidence-boosting book ever published; with sales of over 16 million copies worldwideMillions of people around the world have improved their lives based on the teachings of Dale Carnegie. In How to Win Friends and Influence People, he offers practical advice and techniques, in his A Quest of Heroes (Book #1 in the Sorcerer's Ring) epub / PDF Books

If you havent read this series, youre missing out. Sinclair writes the best Doms. Period.  ~ Under the Covers Book BlogLets liven up our marriage. Itll be fun. Then her husband brought two slaves into the house.That was the end of that.Divorce achieved, Valerie is working on her goals. Fri A Quest of Heroes (Book #1 in the Sorcerer's Ring) epub books

There are many rules a priest can't break. A priest cannot marry. A priest cannot abandon his flock. A priest cannot forsake his God.I've always been good at following rules.  Until she came. My name is Tyler Anselm Bell. I'm twenty-nine years old. Six months ago, I broke my vow of celibac A Quest of Heroes (Book #1 in the Sorcerer's Ring) epub / PDF Books

'One of the greatest achievements in comedy. A work of staggering genius' - David WalliamsAn international phenomenon and pop-culture classic, The Hitchhiker's Guide to the Galaxy has been a radio show, TV series, novel, stage play, comic book and film. Following the galactic (mis)adventures of Arth A Quest of Heroes (Book #1 in the Sorcerer's Ring) epub books

#1 BESTSELLER  The groundbreaking book that redefines what it means to be smart, with a new introduction by the author A thoughtfully written, persuasive account explaining emotional intelligence and why it can be crucial.USA TodayEveryone knows that high IQ is no guarantee of success A Quest of Heroes (Book #1 in the Sorcerer's Ring) epub / PDF Books

Hannah knows all too well that evil exists. What she's not sure of is how to escape evil. Where does she find safety from the evil that chases after her? Her only choice is to find someone who does not fear evil. Her search brings her to the MacKewan keep and Slain MacKewan, the infamous warrior kno A Quest of Heroes (Book #1 in the Sorcerer's Ring) epub / PDF Books

A practical guide to the new economy that is transforming the way we live, work, and play.Uber. Airbnb. Amazon. Apple. PayPal. All of these companies disrupted their markets when they launched. Today they are industry leaders. Whats the secret to their success?These cutting-edge businesses are built A Quest of Heroes (Book #1 in the Sorcerer's Ring) epub books

With WomanCode, holistic health coach Alisa Vitti shows women how to maintain health and vitality with a food-based program to rebalance their hormones.Alisa Vitti found herself suffering through the symptoms of polycystic ovarian syndrome (PCOS), and was able to heal herself through food and lifest A Quest of Heroes (Book #1 in the Sorcerer's Ring) epub books